If you’re trying to play a movie or box set on Disney+ and you see a Disney+ error code 73 on your screen, you should check your connection. There are several reasons for this error message, but the most common cause is a VPN connection blocked by Disney+.

Disney+ is not alone in this, as all major streaming services actively try to block VPN connections to prevent streaming content not available in your area. However, VPNs aren’t the only reason. So if you see a Disney+ 73 error code that you can’t fix, here’s what you need to do to fix the problem. read more 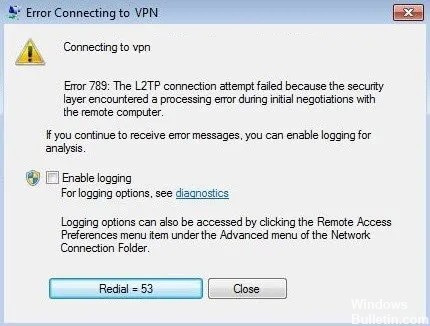 Most users use VPNs that help them browse the internet privately and anonymously from anywhere. In general, VPNs are the most useful solution, but at the same time, they also have some limitations.

Moreover, we see that Internet users encounter various VPN errors more often than not, regardless of the operating system they use. In this regard, we can say that users may encounter several VPN error codes.

For example, if we use a VPN and don’t want to be interrupted by a “connection failed” error message, it will appear from time to time and will be reported as “VPN error 789: L2TP connection attempt failed“. VPN Error 789 is one of the most common errors that occur when a user tries to connect to L2TP. read more When working with a VPN in certain circumstances, errors sometimes occur, especially on Windows 10, one of which is called “806 (VPN GRE error blocked)”. If you see the pop-up, the VPN is not working. The full context of the message reads as follows:

“A connection has been established between your computer and the VPN server, but the VPN connection cannot be completed. Error code 806 – The most common reason for this error is that at least one Internet device (such as a firewall or router) between your computer and the VPN server is not configured to allow Generic Routing Encapsulation (GRE) packets. If the problem persists, contact your network administrator or ISP.” read more